If a tree falls in the forest…

“…once upon a time, researchers simply published their research in professional journals – and there it stayed.  However, my colleagues and I learned things we thought people needed to know.”

The quote above from an EdWeek commentary is Carol Dweck’s explanation for why she published her book Mindset: The New Psychology of Success.

Likewise, as researchers, analysts, or psychometricians, the reason we do what we do goes beyond the results of the particular study, model, or test that we are designing and implementing. There is a higher level purpose for each of our endeavors – to learn things that people need to know. In the field of education, the goal is most often to provide information that will result in better schools, more effective instruction, or improved student learning.  Further, even those outcomes may simply be intermediate goals intended to support the broader goals of producing well-rounded, productive citizens, prepared to create a safe and secure world.

Sure, there may be some who conduct research for more pedestrian reasons such as to make a living, get tenure, or to be able to take a company-paid trip to Kansas in the middle of October.  There are probably even extreme cases like the Big Bang Theory’s Barry Kripke who provided this explanation for his interest in string theory:

I’m a string pragmatist.  I say I’m going to prove something that cannot be proved.  I apply for grant money and then spend it on liquor and broads.

Much of educational research seems to be inspired by the adage “Think globally, act locally.”  The researcher considers the large problems of the field, but studies are designed to improve conditions or outcomes in a limited context, perhaps even within a single classroom, school, or district. Even if a particular study or body of work sits in a journal, the researchers have made a difference in their own little corner of the world. Satisfying careers can be built making a difference one school at a time.

A ripple in the pond

Other times, educational research and researchers are like a ripple in the pond.  One study begets another study or one researcher begets generations of new researchers.   Over time, hundreds of schools, thousands of teachers, and tens of thousands of students may be influenced by work that began with a single researcher, a single grant, or a single study.  That is certainly a desirable outcome, and researchers who accomplish this level of influence in their career are regarded as highly successful.

As individuals, researchers need to ask how is the answer to this research question going to make a difference.  Arriving at an answer to that question, they need to ask how the results will be applied or disseminated to actually make a difference.  As a field, the community of educational researchers has to ask what mechanisms are in place to judge the impact of particular research findings on education.  If particular practices are determined to be impactful, what resources and conditions are needed to implement those findings – including identifying the resources needed to monitor the fidelity of implementation?  Also, what resources and methods are needed to disseminate the findings and related information to policymakers, practitioners, and the public?  These are key components that need to be part of the educational research process.

Conducting research that is never shared or presenting research findings that are impossible (or even very impractical) to act upon is not really making a difference.

Take Me Out To The Ballgame

As the baseball playoffs roll on without my beloved Red Sox or adopted Twins, this is a brief look back at the story of the new Comiskey Park.

In April 1991, the new home of the White Sox opened in Chicago. One article in the Chicago Tribune marked the occasion with the headline New Comiskey: Enjoy, Fans, Enjoy. A second Tribune article by Ed Sherman stated, “[a]fter 80 years of living in the past, the future finally is now for the White Sox.” The virtues of the new park were extolled across the two articles :

What will be most astonishing to any Chicago sports fan is actual convenience, as unfamiliar and unexpected as a world championship

It is OK not to miss obscured sightlines, pre-war plumbing, the odors of the ages or the breath of neighbors. Suffering ought to be confined to watching the team on the field…

Gone is the myriad of poles, which, depending upon the seat, blocked out the pitcher’s mound, home plate or first base. Gone are the tight aisles and confining concourses, which had fans packed together like so many ballpark hot dogs.

And perhaps the most vital statistic to some: The new Comiskey has 25 bathrooms compared to 12 at the old place. That’s another plus over tradition.

This has all been done with a sense of style, with an honorable homage to yesterday…

One short year later, the perception of the new park had changed. The same Ed Sherman wrote

They’ve done it. The future finally has met the past. The wondrous collision has produced Oriole Park at Camden Yards. It’s a new ballpark that feels as if it has been hatched from a time capsule. It’s probably what the new Comiskey Park should have been. In fact, Oriole Park looks more like old Comiskey Park than the new one in Chicago.

Comparisons also will be made to the new Comiskey Park, the first of the new facilities in the ‘90s. On most points, Oriole Park wins.

Comiskey Park has been viewed as the last of the modern, functional ballparks of the 70s and 80s or perhaps as the bridge between those parks and new retro look ballparks that followed, beginning with Camden Yards. Either way, not only the standard, but much of the actual scale for measuring new ballpark design changed with Camden Yards. Some of the new ballparks built since 1992 may not have come close to matching Camden Yards, but few, if any, even tried to match the look and feel of the new Comiskey Park. It was a whole new ballgame.

Some have attributed the design choices in the new Comiskey Park to factors such as lack of time (about 3 years and it opened on time), budget (approximately $135 million compared to $200 million for Camden Yards), and physical constraints of the neighborhood. The architect stated, “[w]e did the best we could with the money we had. What you see is a real building that had the realities of budget and schedule play on it.” Accepting that, we can view the new Comiskey Park as a transition to the future rather than a symbol of the past, but still must acknowledge that in the 1990s ballparks broke free of the standardized, multi-purpose box they had been placed in during the preceding era of stadium renovations. The new parks were built for a single purpose, designed to suit their particular context, and followed individual blueprints.

As evidenced by the original reactions to the new Comiskey Park, it is not that the parks of the previous era were bad places to watch a ballgame. I grew up watching baseball in Fenway Park, self-proclaimed as America’s most beloved ballpark, and still enjoy attending a few Sox games each year with family and friends. However, I loved watching the Twins at the Metrodome while attending graduate school in Minnesota in the 1980s. Sure, the ball might bounce 20 ft. in the air when it hit the ground, fielders could lose balls in the off-white background of the inflatable roof, and you were literally blown out of the place when they opened the doors at the end of the game (actually, that was kind of fun). On the plus side, however, there were no poles totally blocking my view of home plate or the pitcher’s mound in $50 seats. I never had to worry about freezing in April or early May, sweltering in the hot sun in the summer, or sitting for three or four hours in a cold drizzle watching a game that should have been postponed. The Metrodome was a very comfortable place to watch a ballgame.

Now the Metrodome is gone. Last month I attended my second Twins game in Target Field – a beautiful new baseball-only park built in downtown Minneapolis. It was a wonderful 70 degree night, perfect for outdoor baseball. I enjoyed the game and my bag of Minne-donuts (Minnesota’s version of fried dough), but had no idea it would turn out that way when I bought the tickets and planned my trip to Minnesota months earlier. For all of its faults, the Metrodome would have looked pretty nice on a cold and dreary September night.  They probably considered a retractable roof when they designed Target Field, but in the real world there are always tradeoffs. 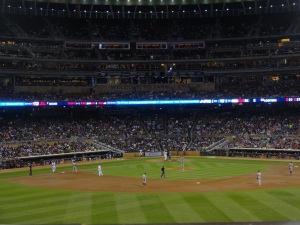 No, the new Comiskey Park was not perfect and was not the new bright and shiny star for long, but it is still standing. Now called U.S. Cellular Field, it has undergone extensive renovations over the years, and by all accounts, is a pretty decent place to watch a ballgame. Even though the world had moved on from the new Comiskey Park even before it opened (construction of Camden Yards was well underway in April 1991), it continues to serve its purpose well 24 years later.

Finally, although it is not the White Sox, there is a team from Chicago in the playoffs this year.

It’s October. It is a great day for a ballgame!