A Month of Goodbyes

Every baseball fan knows that October is a month to say goodbye – goodbye to another baseball season, goodbye to summer, and goodbye to another year. This year the Red Sox season ended rather abruptly on Columbus Day as the Sox were swept out of the playoffs by the Cleveland Indians.  Whether the season ends with a disappointing playoff loss, a World Series victory, or has been effectively over since July, the Red Sox radio team ends their final broadcast of the season by reading the following excerpt from A. Bartlett Giamatti’s The Green Fields of the Mind:

It breaks your heart. It is designed to break your heart. The game begins in the spring, when everything else begins again, and it blossoms in the summer, filling the afternoons and evenings, and then as soon as the chill rains come, it stops and leaves you to face the fall alone. You count on it, rely on it to buffer the passage of time, to keep the memory of sunshine and high skies alive, and then just when the days are all twilight, when you need it most, it stops.

With that we said goodbye to the 2016 Red Sox season.

But saying goodbye to the 2016 season also meant saying goodbye to David Ortiz – Big Papi.  The entire 2016 season, and the final weeks in particular, were a celebration of Big Papi’s career and all that he has meant to Boston.  After joining the team in 2003, he was an integral part of the Red Sox three World Series championship seasons in 2004, 2007, and 2013, providing one dramatic moment after another.  Red Sox fans can debate where Big Papi ranks in the top five or top two Red Sox players of all time, but all agree that this is the end of an era.

One of many home runs by Big Papi

For me, Big Papi saying goodbye to the Red Sox also represents a goodbye of a much more personal nature – one more event forcing me to say goodbye to my daughter’s childhood.  There is a special bond between a father and daughter or father and son over the Red Sox and a favorite player.  For my father and me, it was Carl Yastrzemski, Yaz.  My memories are still so vivid of that July night in 1967 when we made our first trip together to Fenway.  We walked up to the box office window to buy tickets – yes, you could do that in 1967 – and the man in the ticket booth asked, “Who’s your favorite player?” and then found us two seats high up along the left field line; where we could look down on Yaz and practically reach out and touch the Green Monster.  Sure, the Sox lost 10-0 to the Orioles that night, but that didn’t matter.  Over the next 16 years, so many memories were made watching Yaz together at Fenway or at home on TV; including one final trip to see Yaz play (and hit a home run) in July 1983.  When Yaz played his final game later that year, I was in graduate school, sitting in my dorm room in Minnesota.  My Dad and I continued watching the Red Sox together, of course.  We sat in despair and shock together as Game 6 slipped away in 1986; and were on the phone together when the Curse finally ended in 2004.  But there was nothing quite like those childhood memories of trips to Fenway with my Dad to watch Yaz.

On October 10, the day that Big Papi played his final game, my daughter took the GRE, as she prepares to apply to graduate school.  She started following the Sox during the playoffs in 2003 – when she learned in the game 7 loss to the Yankees in the ALCS what it meant to be a Red Sox fan. All of that changed forever, of course, the following year. 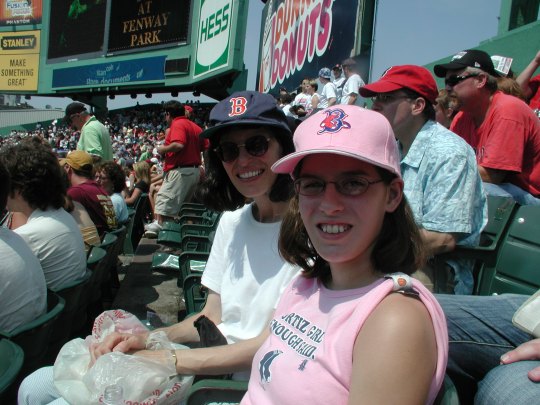 The shirt says it all

We made our first trip to Fenway in 2004 – taking an afternoon off from the CCSSO conference in Boston.  There have been many other trips to Fenway since 2004 as well as vacations planned around seeing the Sox and Ortiz play in Baltimore (Fenway South) and Toronto (Fenway North).  We took a surprise trip to Yankee Stadium one Memorial Day weekend (Big Papi hit a home run) and were lucky enough to get tickets to Game 2 of the 2013 World Series (Big Papi hit a home run).  Now that part of our life is complete and with luck there will be many more memories to make in many more years ahead.

And then a few days after the end of the Red Sox season and the farewell to Big Papi came one more goodbye as I learned of the passing of Stan Deno.  I took Stan’s behavioral psychology course during my first semester in the doctoral program at the University of Minnesota.  The following spring, he connected me with one of his former students, Steve Robinson, and an assistantship in a research project being conducted in a St. Paul elementary school.  Stan was not my advisor and was not even in my department, but his guidance while I was at Minnesota, his work, and his example have had a profound impact on my career and my life.  I was never a member of the inner circle of Stan’s students who have spread his curriculum-based measurement and progress monitoring throughout the country and the world, but I have certainly seen the impact of his work and their work over the last 30 years.

In 2007, I organized a session at the CCSSO Large-Scale Assessment Conference in Nashville, Tennessee with Steve Robinson and Gerry Tindal titled, The Search for Betty Crocker.   The purpose of the session was to discuss what is the appropriate amount and type of information that an assessment should provide to support teachers while acknowledging and respecting their integral role in using that information to make appropriate instructional decisions.  As I have continued to think about that question over the last decade, I have become convinced that Stan and his students got it right with CBM so many years ago.  The basic idea is to give good teachers good, convenient, and timely information about whether their instructional approaches or interventions are working – and allow those teachers to apply their content knowledge and pedagogical skills to use that information and make the necessary adjustments.  Who could ask more of an assessment than that?

In closing, I would like to share this story from the spring of 1990.  During the 1990 AERA conference in Boston, I was sitting in a hotel lobby with Stan and Steve Robinson as we waited for some of Stan’s former students who were gathering for lunch.  The topic of conversation, of course, was sports.  In particular, the topic was that although there have been many superstars in every sport, there are few players who actually changed the way that the game is played – superstars among superstars, who have a lasting impact on the game.  David Ortiz, for example, has left a lasting mark on Boston, but probably not on the game of baseball.  In fact, many have argued that even as he finished his stellar career, he was already an anachronism; that baseball teams no longer seek out highly paid designated hitters like Big Papi.

I made the point at that meeting in 1990 that one could argue that Stan was already one of those people who had changed the game.  I had recently attended a workshop on CBM with teachers and administrators in Portland, Maine.  The workshop was conducted by researchers from Portland, Oregon (or it may have been Washington).  Even without his direct involvement, his work was impacting teachers and students from coast to coast. Since 1990, the evidence that Stan has changed the game has only continued to grow.  There are so many progress monitoring, RTI, and even interim assessment programs whose roots can be traced directly or indirectly back to Stan and his work with CBM.