As time goes by, certain memories of Christmases past become stronger than others.  Most are filled with family, food, music, and fun; but a few other things manage to creep in as well.  On Christmas 2017, here is a list of my 12 memories that mean Christmas to me.

My sister, 2 years younger than me, was at a stage where she recognized letters but could not yet read.  One Sunday afternoon before Christmas, my father was at the sink washing dishes and my sister was in the pantry looking at the box of Christmas cookies with the word NOEL written across the package.  She asks my father, “What does N-O-E-L spell?”.  She hears his response “No L” and responds “Yes, there is an L”  After 5 minutes of my father trying to explain, my sister becoming increasingly frustrated, and me laughing hysterically, I knew that Christmas always was going to be one of my favorite holidays.

There’s always tomorrow for dreams to come true, believe in your dreams come what may

Christmas Day is in our grasp! So long as we have hands to clasp!

And just in time in 1974, along came The Year Without A Santa Claus with the Heat Miser, Cold Miser and the advice to “just believe in Santa Claus like you believe in love.”

It wouldn’t be Christmas, of course, without the photo card of me and my sister (and later the dog).  In the days before Shutterfly, digital cameras, and even 1-hour photo that meant family “photo shoots” beginning in late summer or early fall to ensure a good picture.  Most years that involved bring a few Christmas decorations up from the basement and dressing us in nice clothes.  One year, my Mom decided that an outside shot would be nice.  So, in August we were hanging tinsel and decorations on the evergreen tree in my aunt’s front yard and donning our winter coats. 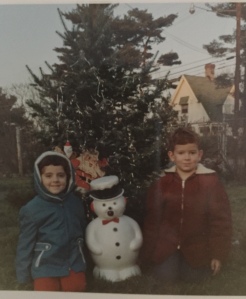 In 1967, I was aware of the space program and the Red Sox.  In 1968, the rest of the outside world came crashing through the door.  From the Pueblo to the Tet Offensive to Martin Luther King to Bobby Kennedy to the Democratic Convention to the protest at the Olympics to the election of Richard Nixon everything seemed to be spinning out of control.  And then came Apollo 8 and its Christmas Eve broadcast while orbiting the moon.

Throughout my childhood the annual Smyth family Christmas party brought together three generations of my mother’s side of the family. Grandparent, aunts and uncles, and most of our gaggle of 17 cousins gathered for an afternoon of food, games with Christmas-themed trinkets as prizes, Christmas music, etc. In the mid-1970s one of my older teenage cousins decided to replace the Christmas album on the record player with a pretty yellow album and music I had never heard before.  A few minutes later, parents entered from the kitchen, the album was flying across the room toward the wall, and our annual Christmas parties were no more.  I still use We’re American Band as the song on my alarm clock.

From 1971 through 1977, I attended Boston Latin School – the oldest public school in the country and a place steeped in tradition.  One of the more recent, informal, and beloved informal traditions was members of the senior class singing Christmas Carols on the balcony overhanging the cafeteria during lunches on the day before Christmas vacation.  Nothing, even traditions, however, lasts forever. In 1972, the school became coed.  Sometime in that period, they took away the one minute of silent meditation and reflection at the beginning of the day.  In my senior year, they told us Christmas carols were no longer allowed in school and administrators and faculty did everything they could to thwart their singing.  Growing up in Boston, I had not realized that Christmas was controversial.

My wife, Lisa, and I were married in September 1984, and our first two years of married life were spent in Minnesota while I completed coursework for PhD program.  This meant leaving our apartment in Minneapolis in mid-December to return “home” to Boston for Christmas. The first year, we decided not to decorate the apartment because we would not be there for Christmas.  A bad idea. The second year, around Thanksgiving we headed to the Goodwill store up the street, picked up a silver aluminum tree, and all of the boxes of old ornaments that we could get for $25 (and could fit into our Sentra).  We had our first Christmas tree and have had one every year since then (although never silver again).  Upon returning to Minneapolis after Christmas break, we donated the tree and ornaments back to Goodwill.

Lisa is one of those lovely people with the tremendously annoying ability to pick up a wrapped present and know immediately what it is.  One year, my parents were determined to stymie her.  They bought her a sewing box from Italy made of beautiful brown wood.  It looked like they had her.  As she removed the wrapping paper and stared at the brown cardboard box with no clue what it contained, she reported what she saw – a brown box.  My Dad, mistakenly thinking that she had guessed that it was the “brown sewing box” was beside himself, gave away the surprise, hilarity ensued, and an annual Christmas story was born.

Everywhere else, December 24 was Christmas Eve.  For our family, however, it was first and foremost my grandfather’s birthday.  That meant a wonderful Italian dinner followed by an evening with his entire family (see #5 above) filling the two-family home we shared with them.  After lots of food, laughter, and probably just a little drinking, the evening invariably ended in our living room with my sister at the piano and my uncles leading the singing of Christmas carols and old standards from the 1930s, 40s, and 50s.

After my grandfather’s passing, Christmas Eve became a night to celebrate with my wife’s family.  That became a bit more complicated when her sister married a “nice Jewish boy from Long Island” and they were raising their children in that faith.  In the spirit of family peace and harmony, the compromise was “Chanukah presents”, wrapped in a limited variety of blue Chanukah paper (buy as many rolls as you can when you see it), and place carefully under the Christmas tree.  Nothing confusing there for a child, right?  One year, when my niece was around 4 years old, I asked her what all the presents were for.  She looked up and replied matter-of-factly, “After dinner.”

In 2002, our Christmas Day visit to my parents’ house was threatened by an impending snowstorm.  The storm was expected to start by late morning and dump about a foot of snow on us in Southern Maine.  Christmas was canceled this year.  Not so fast, in the spirit of Rudolph, we loaded up the sleigh (car with presents) right after breakfast and started out on the 90-minute drive to my parents.  We called my parents from the car as we were approaching their house (during which call, my Mom told us to hold on someone was pulling into their driveway).  They got to give Christmas presents to their granddaughter in a whirlwind visit (which was not quite as much of a whirlwind as it should have been), and we made it almost all the way back home to Maine before the roads were covered with snow.

In December 1993, we were preparing for the birth of our first child – who was due in late January.  Mary had other plans and was born on December 15.  Starting out a just a bit under 4 pounds, she spent the first ten days of her life in the hospital in an isolette (or baby incubator).  When we arrived at the hospital on Christmas morning, however, she was out of the isolette for the first time and dressed in a bright green Christmas onesie.

We spent that day holding our Christmas miracle and starting a whole new set of Christmas memories with her.  To my staples of Rudolph, Charlie Brown, etc. were added Elmo Saves Christmas, Arthur’s Perfect Christmas, Elf, and The Polar Express.